August 13,2016
Today I went to Kyushu National Museum with Teppie,Shimao and Kasuhiro the Kyushu National Museum open in 2005 as the fourth national museum, after the ones in Tokyo, Nara Kyoto. In this museum have 5 zone 1.old stone age-Jomon Culture This area introduces the cultural interactions that took place during the Old Stone Age and Jomon period, this is highlighted through the unique objects such as stone tools and earthenware. 2. Yayoi-Cultivating Rice, Rice cultivation began during the Yayoi period and the kings journeyed into the afterlife with a rich array of burial goods. The Kofun period brought about the influx of new pottery wares and the custom of horse riding from overseas; offerings made on Okinoshima, an island in the Munakata area are also introduced here. 3. Nation Building The Age of the Envoys This area introduces how an ancient country progressed through the exchanges with China and the Korean peninsula, from which Tang China’s Buddhism the legal codes were brought in. 4.Merchants of the Asian Seas This area displays various information and objects about the Mongolian invasions of Japan; the overseas cultural exchanges by the Zen Buddhist monks; the flourishing international trades of the merchants. 5. Smaller World, Closer West This area presents the turbulent 400 years during which trades with China and the Netherlands took place in Nagasaki, and the arrival of the “Black Ships from the West marked the beginning of a new era.

Moreover, in the museum have exhibition area. Today has show the works of Kaii Higashiyama in topic Nature, Man and Towns. However, in the museum don’t take photo. In my opinion Japanese and Thai people have similar way. We have the same pattern for living is work, eat and grow up also we want relief which affect to culture and tradition. The things which show in museum indicated we have resemble in way of life such as horse baked clay, wooden toys, pottery, boat, hunting tools, agriculture tools, religions, statue and restraint mind. Everything have Asia essence which made we have similar way. So today I think that history and environment create the society which is primary disposition of Japanese. Japanese are patient and sacrifice people which look from architecture in the past also the growing of country on this topography. 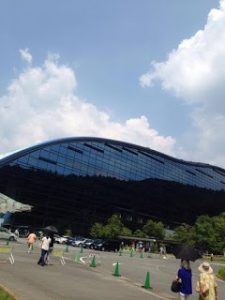 Over night at Hakuunsha company